Israel is a melting pot of cultures, religions, and peoples from across the globe. As the world’s only Jewish state, Israel’s capital and Judaism’s holiest city, Jerusalem stands out as a great tourist attraction. One of the world’s most famous cities, Jerusalem is world-renowned for its sights, cuisine, culture and nightlife. Jerusalem is the focal point of the three biggest Abrahamic religions, the city is divided into quarters (Jewish, Christian, Armenian, and Muslim), and holds many religious sites and historic landmarks such as the Temple Mount, the third holiest site to Islam and one the world’s oldest mosques. The Western Wall, one of Judaism’s holiest sites. The Western Wall is a must, the historical wall of the Jewish temple where you can see people who come to pray all hours of the day. Via Dolorosa “way of suffering” the path Jesus was forced to take by the Romans on his way to his crucifixion. Church of The Holy Sepulchre, and more.

Jerusalem offers many attractions to different people, for people who love culture Jerusalem, and its surrounding are a home to more than over 20 different museums including: Yad Vashem, Agnon House, Herzl Museum, Museum of Psalms, Friends of Zion Museum in Jerusalem many more. If you are more into nightlife Jerusalem also have many pubs and venues for live music such as the Yellow Submarine, the jazzy and Gatsby and Birman, one can also casually stumble upon underground rock shows in different locations. 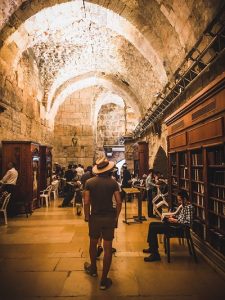 Culinary wise any foodie will be more than happy to find himself in the holy city. Falafel, shawarma, sabich and humus, Jerusalem has it all. If street food is not your go to there are many fancier and upscale restaurants. Machane Yehuda market is one of the biggest and most colorful one in Jerusalem, where a good bargain is sure to be had. Spices, fresh fruit and vegetables, honey, bakeries and anything you can think of. You can also hop on to the old city market, found between the Jewish quarter and Muslim one.

In conclusion, Jerusalem is place where you can spend weeks exploring, tasting, seeing, and learning. There will always be new things to explore and experience.