Sarah was a member of NILI, a ring of highly trained Jewish spies that fought alongside the British during World War I. In fact, she is often referred to as the “heroine of NILI.” The name of the group is actually an acronym, which stands for the Hebrew phrase “Netzah Yisrael Lo Yeshaker. ” This translates to “the Eternal One of Israel will not lie.”

In the British’s fight against the Ottoman Empire in the region of Palestine between 1915 and 1917,  NILI played key roles in creating successful strategies. Its espionage skills granted the British army the ability to save many lives.

In the spring of 1917, while on a secret mission to Egypt, Sarah was requested by her brother Aaron to remain in Egypt, rather than to endanger her life  further by being associated with the group. After outright refusing his request, Sarah returned to the land of Israel in order to lead NILI. 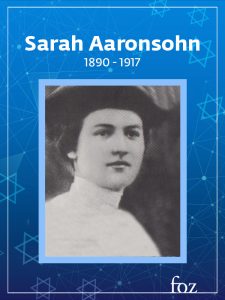 Sarah was arrested by Turkish military personnel in the Fall of 1917. In an effort to obtain information about the whereabouts of her allies, the Turks tortured her for three days straight. She endured heroically and disclosed no secrets. To escape further torture and to not risk putting her brothers and sisters in danger, Sarah shot and killed herself.

Sarah Aaronsohn’s story and sacrifice must never be forgotten.