The Friends of Zion Museum, founded by Mike Evans, an American Christian evangelist and author of over 70 books, first opened its doors in 2015.  His vision was to create a unique museum using state-of-the-art technology to show Israel the love that Christians have for the Jewish people. In addition, the Museum showcases the story of the Jewish dream of a homeland and the courageous non-Jews who assisted in fulfilling this dream. After years of planning and hard work, Mike Evan’s vision finally came to fruition.

Telling the stories of assistance, support of Zionism, and aiding in the establishment of the State of Israel, given to the Jewish people throughout history by non-jews, this Museum in Jerusalem is an experience not to be missed. A “smart” museum with groundbreaking technology that brings exhibitions to life and shows the stories of the many heroes who have supported the Zionist dream of a homeland. 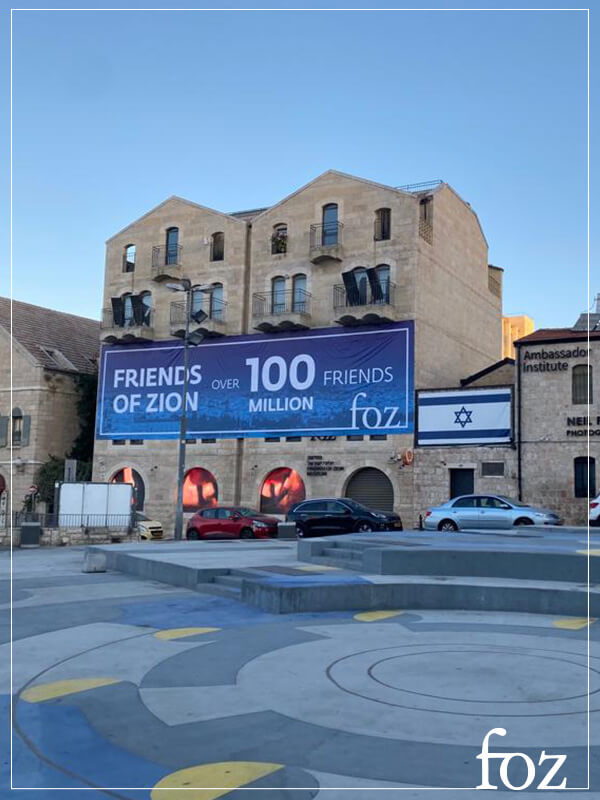 The technologically superior and interactive Museum tells the story of the Jewish dream of a homeland and the courageous non-Jews who assisted in fulfilling this dream. The Museum exhibits different periods in Jewish history, beginning with Abraham and all the way to establishing the State of Israel.

The Museum has several exhibits, each one depicting a different period. The Land of the Promise is an audio-visual presentation showing the 3000-year-old narrative of the land of Israel, its people, the Founders Theatre showing with creative animation and special lighting the beginning of the covenant between God and the people of Israel. The Hall of Dreamers tells the stories of four extraordinary people who believed in the dream of bringing the scattered people of Israel back home. The Hall of Visionaries – a large 3D interactive mural touch screen showing heroes of Christian Zionism, including Winston Churchill and Queen Victoria, who advocated for and worked toward a state for the Jewish people. The lights in the Darkness exhibit is highly emotional and shows the Righteous Among the Nations who helped save Jews during the Holocaust in whatever manner they could. The Hall of the Brave acquaints us with life-sized figures of the international heroes who helped create the nation and tell us in their stories in their own words. The final exhibit is a powerful 3D presentation summing up the legacy of the Christian heroes who helped create the State of Israel.

The FOZ Museum in Jerusalem is a must for everybody to visit and experience at least once, but guaranteed, you will want to return again and again once you have been.