“There is the sharing of common values and that’s what we have here today. What we have today is the alliance of those who believe in great judeo-christian tradition. we have no better friends in the world than our great Christian friends and I want to thank each of you for your friendship. It’s no accident that in Israel, that it’s the only place in the Middle East where Christians are free to practice their faith, complete religious freedom for all – especially for Christians who are constantly attacked in the Middle East. What we want to do in israel is continue to guard the religious freedom of all.” 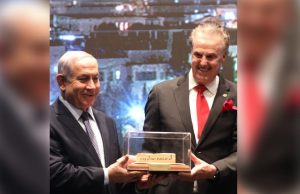 In the modern world where social media is the leading source of information, there is presented a challenge. How can we combat anti-semitism and the lies of BDS that are so prevalent and seemingly ingrained in our society? With its ever-growing community of over 67 million people from over 140 countries around the globe -making it one of the largest social media networks in the world-  the Friends of Zion Heritage Center has found the need to construct an in-house Ambassador Institute to lead on the forefront of the battle how Zionism is taught. In this hub, we will be prepared with state-of-the-art technology and uniquely trained leaders second-to-known to defend the State of Israel and the Jewish people.

Since its official opening in 2015 the Friends of Zion Heritage Center has tasked leading social media researchers on how the domain of internet news and online networking operates. The results have given our team a clear insight on how to build a proper outreach program that will not be buried under those who are trying to diminish and bury justice and truth. From my personal conversations with these leading experts, the Friends of Zion Heritage Center has concluded that 41% of the world acquires its world news and global outlooks from its smartphones and 41% of the world is also below the age of 25. These two key pieces of information have given us the proper foundation to operate in a world where a printed newspaper may not be as fast as a well-timed tweet or online article. Our initiative will reach through the fake news and outright slander of today to contact those who seek an understanding of what is really happening on the ground.

These numbers do not lie. We have done our research diligently and have been told by many world leaders that FOZHC stands at the forefront of the BDS battle, and that we are on the path to success. In just 4 years since opening our doors, the Friends of Zion Heritage Center has gained over 67 million followers and supporters – something that in my years of experience in the media world seems unprecedented. In such a short time of activity, we have been privileged to call world leaders, such as US President Donald Trump, one of our greatest Friends and supporters.

In December of 2017, I was honored as the Founder and Chairman of the Friends of Zion Heritage Center to award President Trump with the ‘Friends of Zion Award,’ to honor his courageous support of the State of Israel and the Jewish people. Also present were Vice President Pence, Senior Advisors Jared Kushner and Ivanka Trump and faith leaders representing over 150 million Christians globally. This prestigious award is only given to those that have gone above and beyond for the State of Israel and the Jewish people.

As I have hinted to before, the Friends of Zion Ambassador Institute does not have just a focused approach on dispersing honest and clear reporting to the United States of America alone. Rather, it has in mind to connect the world to both the history and future of Zionism. Many forget that we must develop a community that will work together and to support one another as well. For example, the Friends of Zion Museum bestowed the “Friends of Zion Award” unto President Juan Orlando Hernandez of Honduras, who had officially declared their recognition of Jerusalem as Israel’s capital. In addition to that brave and righteous move,  Honduras officially opened a ‘commercial office’ in Jerusalem. For that, we hosted a celebratory reception for the President of Honduras and his delegation.

Many forget to properly thank their friends, even if it is for doing something right. The Friends of Zion Community knows that gratitude, even for the right task, must be thanked and shown respectful appreciation. To show its support for Honduras, our livestream award ceremony was joined by 2.4 million people in celebration. For that, I would like to thank the FOZ Community.

In today’s age of the Internet and social media, where news and ideas can be conveyed in as little as 280 characters, an economy can be taken down by just one tweet and fame can be gained by a few choice words; all while being hidden behind a screen. As a result, governments are trying to limit media access wherever they can, desperate to keep the power in their hands, and not let it fall to the masses. The  Friends of Zion Ambassador Institute has a detailed plan for this, a plan to change the world for the better. The goal is grand but simple: it is time to take back the news and to take back the internet from those who abuse it and use the platforms for slander, delegitimization, and ‘fake news.’ This plan is what I call ‘phase three’ of the FOZ Initiative – the Friends of Zion Ambassador Institute.

The FOZ Institute will revolutionize how Zionism is taught and presented to the masses. The Friends of Zion Institute has even partnered with Blackboard, the world’s largest educational platform. Blackboard is a $2.4 billion organization that is dedicated to helping solve the most critical challenges in today’s ever-changing environment to increase students’ success. The joint mission will help millions fight anti-Semitism, and distribute the necessary tools to defend the Jewish people and State of Israel.

For over 20 years, Blackboard has been the leading organization in understanding the world of the student the organizational tools he or she may need to excel. The program has been rated as one of the most comprehensive student-success solutions in the educational field and has been receiving what seems to be unlimited praise.

In addition to dispersing correct and accurate information in protecting Israel over vast social media networks, the FOZ Ambassador Institute will focus on sharing with the world just who the Evangelical community is, and what it represents. This community, made up of over 700 million members worldwide, has some of the most active Zionists in the world. They are proud of their support of Israel, and many of their contributions are unbeknownst to the masses.

Israel’s Prime Minister, Benjamin Netanyahu, has said “I don’t believe the Jewish state and modern Zionism would have been possible without Christian Zionism. Through the years so many Christians not only believed the Promise, but were willing to give their lives for it. Their sacrifice has contributed to who and what we are today as a nation”.  With the Friends of Zion Ambassador Institute, we hope to share the stories and support of these brave Christian Zionists.

We are proud to be taking part of the third annual Christian Media Summit, which has brought over 150 journalists and media professionals to Jerusalem. From across the globe, 150 media outlets, world leaders, ambassadors, politicians from both sides of the aisle, military personnel, and other esteemed guests will gather and unite to celebrate the Friends of Zion Heritage Center, with its 67 million global supporters. Sending the very first broadcast from the FOZ Media Center will be Prime Minister Netanyahu.

While this seems like a huge responsibility, I have gained years of experience that many could call impossible to achieve. Who would have thought that a President of the United States would allow the founding of a Presidential Faith Initiative and for that advisory board to be representing the USA in delegations across the globe? Who could have guessed that the FOZHC would have grown so rapidly that it would be able to post 100s of banners and billboards celebrating the Trump Administration’s move of the US Embassy to Jerusalem? With each step we climb, there is another higher standard to reach for. I am confident that we have the team and tools prepared to do what must be done. We are here to defend Israel and her people, and will fight those who stand to bring her down.

Dr. Mike Evans is a No. 1 New York Times bestselling author with 98 published books. He is the founder of Friends of Zion Museum in Jerusalem , of which the late Shimon Peres, Israel’s ninth president, was chairman. He also serves as a founding member of the Trump Evangelical Faith Initiative, and has 67 million Facebook followers.