How Israel’s National Anthem Came To Be

“Hatikvah” (The Hope), Israel’s national anthem, made its appearance long before the State of Israel was officially declared. The words were written by a well-travelled 19th-century poet and linguist, Naftali Herz Imber, who was born in what is now Ukraine, but for a time lived as a secretary to the renowned Christian Zionist Laurence Oliphant. Oliphant with his wife Alice emigrated to what was then Ottoman-ruled Palestine in October 1882. Learn more about the Oliphants at the Friends of Zion Museum in Jerusalem 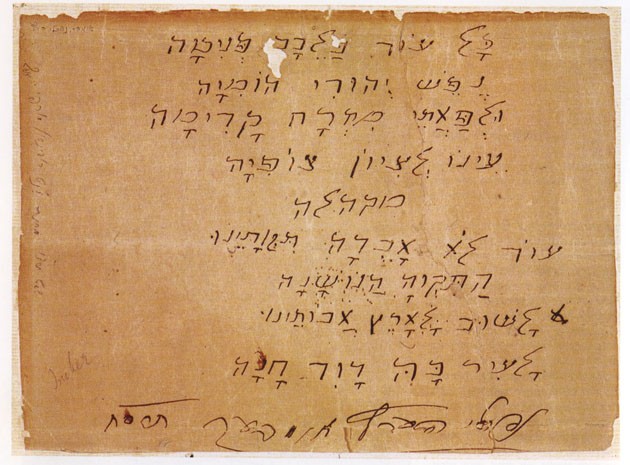 In 1886, Imber published a collection of his poems (including one called “Our Hope”). He dedicated the book to the Oliphants. “Our Hope” was set to music by Samuel Cohen, and as “Hatikvah” became the theme song in abbreviated form of the growing Zionist movement, it was chosen as the anthem of the First Zionist Congress in Basel, Switzerland, in 1897 and became the unofficial national anthem of the new State of Israel in 1948. In 2004 it was designated officially as the anthem by parliamentary decree. In its modern rendering, the official text of the anthem incorporates only the first stanza and refrain of the original poem.

The melody for “Hatikvah” derives from “La Mantovana,” a 16th-century Italian song, composed by Giuseppe Cenci. This melody gained wide currency in Renaissance Europe under various titles. The melody was used by the Czech composer Bedrich Smetana in his set of six symphonic poems celebrating Bohemia, namely in the second poem named after the river Vltava, which flows through Prague. The piece is also known under its German title as “Die Moldau.”

The harmony of “Hatikvah” follows a minor scale, which is often perceived as mournful in tone and is uncommon in national anthems. But, as the title “The Hope” and the words suggest, the import of the song is optimistic and the overall spirit uplifting, expressing the fulfilment of “the hope of  2000 years – to be a free people in our land, the Land of Zion, Jerusalem.”