Jerusalem – a City with Many Names

Jerusalem has many names. That shouldn’t surprise anyone because Jerusalem has a long history, going back even before it became the capital of the nation of Israel in the time of King David.

The multiple names are also not surprising because Jerusalem is so beloved by so many people around the world. Indeed, we all call our loved ones by many endearing names — dear, darling, precious and so forth. So why not many fond names for this special, spiritual capital? 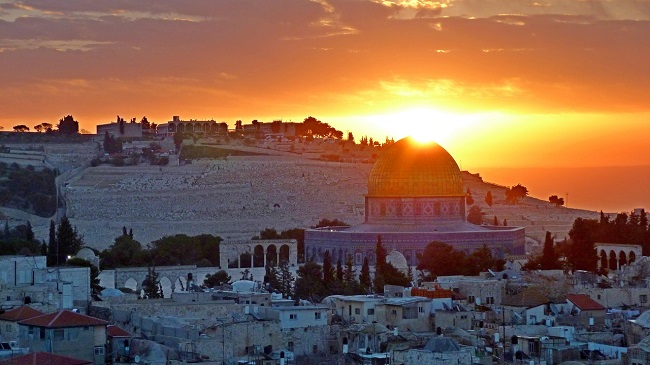 According to the Jewish Midrash, Jerusalem has 70 names (the same number as modern Israel’s current anniversary year). Lists have even been compiled of 72 different Hebrew names for Jerusalem in Jewish scripture. Today, Jerusalem is called Yerushalayim in Hebrew.

A pre-biblical name found in Akkadian is “uru-salim,” variously interpreted to mean “foundation of  [or: by] the god Shalim.” Shalim, was the Canaanite god of the setting sun and the nether world, as well as of health and perfection. A variation of the name as “Shalem” is also derived from the same root as the word “shalom,” meaning peace, so that the common interpretation of the name can be said to be “The City of Peace.” Today, we find Jerusalem  (Yerushalayim) to be the name most commonly used in the Bible and the name used by most of the Western world.

Another early name referring to Jerusalem is “Salem.” This is evidenced by Psalm 76:2, which uses “Salem” as a parallel for “Zion,” the site of the ancient Jebusite citadel of Jerusalem. This area later came to be called The City of David following King David’s conquest of the citadel. Today, the name Mount Zion applies to an area in the south of the Old City of Jerusalem. .

There are many other ancient names for Jerusalem. Two well-known ones:

Aelia Capitolina was the Roman name given to Jerusalem in the 2nd century C.E., after the destruction of the Second Temple. The name refers to Hadrian’s family, Aelia, and to the hill temple of Jupiter built on the remains of the Temple.

Jerusalem fell to the Muslim conquest of Palestine in 638. The medieval city corresponded to what is now known as the Old City. The modern Arabic name of Jerusalem is al-Quds (“The Holy One”), and its first recorded use can be traced to the 9th century C.E., two hundred years after the Muslim conquest of the city. Al-Quds is the most common Arabic name for Jerusalem and is used by many cultures influenced by Islam.

But whatever you call Jerusalem, it is to millions of people the world over “Ir Ha-Kodesh,” the “City of Holiness.” On May 13, 2018, we will celebrate jerusalem Day, officially marking the 51st year of Jerusalem’s reunification following the Six-Day War of 1967 and its openness to all.

Happy Jerusalem Day to all who love and pray for the peace of Jerusalem!