Two decades before the United Nations Palestine partition resolution of 1947 that led to the declaration of the State of Israel, an international conference was held in Europe that set the framework for the future independent status of the Land of Israel. That conference was held 99 years ago in San Remo, Italy, from April 19-26, 1920.

The San Remo Conference was held following the conclusion of World War I to determine the precise boundaries for territories captured by the Allies from the Ottoman Empire in that war. 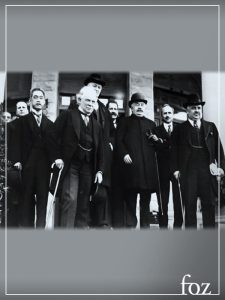 The conference, attended by Great Britain, France, Italy and Japan, and with the United States as an observer, was a continuation of a previous meeting between these allied powers that had been held in London in February 1920. In February, it was decided, that Palestine would be under the rule of the British Mandate, while Syria and Lebanon would be under French rule. Part of the adopted resolution at San Remo clearly stated the intentions to make Palestine a legal Jewish homeland, confirming the pledge to that effect contained in the 1917 Balfour Declaration of Great Britain.

In the 1920s, as well as in 1947, the name “Palestine” was the name referring to the Land of Israel. In effect, then, the San Remo Resolution created a legal precedent for Palestine to be restored as the national Jewish homeland. That precedent was then given further international confirmation by the 1947 Palestine Partition Plan adopted by the United Nations General Assembly.

Looking back, one can thus say that in another year, Israel can celebrate its inauguration that took place exactly a century ago in San Remo in Italy.