Born in Amsterdam, Netherlands on August 19, 1885, Betsie ten Boom was the oldest child of Casper ten Boom and would make history for her courageous effort to save Jews in Nazi-occupied Netherlands during World War II. The Ten Boom family had a long history of being devout Dutch Christians whom were committed to their beliefs, and in the end, risked and later gave their lives in pursuit of their values.

The story of Betsie ten Boom starts with her great-grandparents in 1844, when Willem and Elisabeth ten Boom started a weekly prayer session in their home. In the Ten Boom home, this weekly event became a family tradition and would last one-hundred years. The Ten Booms and their friends would pray for many miracles but they were always consistent in praying for one specific prophecy to come true again by the hand of the Almighty – that the Jewish people return to their historic homeland, the Land of Israel. In Psalms 122:6, this prominent prayer is written with great weight: “Pray for the peace of Jerusalem: May those who love you be secure.” 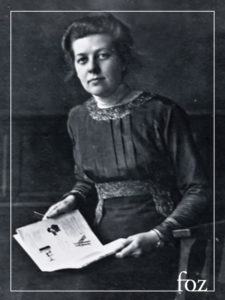 The weekly prayer meeting lasted until 1944, this was due to World War II and the chaos that would take place on the Western front and disrupt these important gatherings. Though, the courage that had taken place in the Ten Boom’s home would continue onto following generations. Casper ten Boom, son of Willem and Elisabeth, would be an elderly man during World War II, though this did not stop him and his daughters, Corrie and Betsie, from doing what was right. In this time, the story of Casper and his daughters was one of continued faith and family. Corrie and Betsie had both never married. Betsie, whom, was ill with pernicious anemia, was told she would not be able to have children, leaving her unambitious to marry. The sisters worked full-time to take care of their father and siblings, they were also trained watchmakers and bookkeepers at the family’s store.

In May 1942, a Jewish woman came to the Ten Boom home begging for help, knowing that if caught, she would be vulnerable to being deported by the Nazis or worse. The Ten Boom family, without hesitation, saw what most did not, her humanity. They not only took this woman in but also opened their home to many others whom were also in need. As Casper told the woman: “in this household, G-d’s people are always welcome.” During this critical time, the plight of the people persecuted by the Nazis were sentenced to certain death, that is when Casper ten Boom and his daughters Corrie and Betsie rose to the occasion, giving Jews in need a place to stay but also taking care of them in an era of darkness.

In February 1944, the Nazis had started suspecting that the Ten Booms were hiding Jews in their home and would take action accordingly. The day that the Gestapo, the Nazi secret police, raided the Ten Boom home, they ended up arresting thirty people. Three of which were Casper, Betsie and Corrie ten Boom, others included other Ten Boom relatives, supporters of their actions, and people hiding from the Nazi’s genocidal intentions. They were all taken to Scheveningen prison and interrogated. While the Nazis sent Bestie and Corrie to the Ravensbrück concentration camp, Casper was taken pity on. The Nazis guaranteed him his freedom due to his old age, saying that he would be able to die in his bed instead of in prison or a concentration camp. Casper ten Boom, with all the strength he had and fire in his eyes, told the Nazis that “If I go home today, tomorrow I will open my door to anyone who knocks for help… It would be an honor to give my life for God’s chosen people.”

In the end, Casper ten Boom died in a prison cell, knowing he had done what was just in G-d’s eyes. His daughter Corrie survived the ordeal at Ravensbrück concentration camp and was able to tell her story of good prevailing over evil. The concentration camp that the ten Boom sisters were sent to was one for political prisoners, though, it is told in Corrie’s book “The Hiding Place,” that there was a Nazi guard in particular who was cruel to Betsie, making her experience at the camp harder than it had to be. Corrie’s world-famous book tells this story and many others that keep their memories alive. Corrie shares with us one of Betsie’s quotes: “If G-d has shown us bad times ahead, it’s enough for me that He Knows about them. That’s why He sometimes shows us things you know-to tell us that this too is in His hands.” Though, Betsie ten Boom died at the concentration camp of deteriorated health conditions, her feats left her without life but with an honorable legacy.