Governor of Texas Greg Abbott was honored at the Friends of Zion Heritage Center (FOZHC) in Jerusalem with its highest honor – the ‘Friends of Zion Award’ – during his visit to Jerusalem. At the ceremony, Gov. Abbott said “There are strong relations between Texas and Israel. Anybody who is an enemy of Israel is an enemy of Texas. Whenever anybody threatens Israel, we come side by side with Israel to support Israel in any way we can.”

The ‘Friends of Zion Award’ is bestowed on world leaders that have gone -above and beyond- in defending the State of Israel and the Jewish People. Over a dozen leaders have received this award, including US Presidents George W. Bush and President Donald Trump.

Gov. Abbott is an American attorney and politician who serves as the 48th governor of Texas since January 20, 2015. Previous to this position, Gov. Abbott held office as 50th attorney general of Texas from 2002 to 2015. On Israel’s Independence Day, Gov. Abbot signed into Texan law an anti-boycott Israel bill that would limit those whose focus is to unjustly sanction and divest from Israel. His signing of the bill has made Texas the 18th state in the USA to take action against the anti-Israel BDS movement. In addition, Gov. Abbott actively advocates and defends Israel on his personal social media accounts and has been to Israel twice since taking office for Texas-Israel economic trade missions. 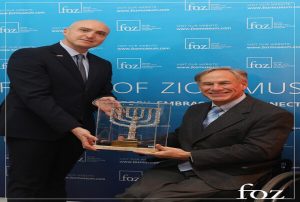 In thanking of Gov. Abbott’s service in building a strong Israel-US relationship, Dr. Evans said “I appreciate and admire the work of my governor, Greg Abbott. His dedication to anti-BDS laws and building stronger economic ties shows that there are those in the world that are willing and proud to support the State of Israel. Governor Abbot is a true Friend of Zion and espouses the unbreakable bond between the State of Israel and the United States of America.”

FOZHC is a $100 million project that was founded by Texan Dr. Mike Evans, who is also a founding member of the Trump Evangelical Faith Initiative. FOZHC has recently inaugurated its 21st-century communication center by Israel Prime Minister Benjamin Netanyahu, US Ambassador to Israel Friedman, and Dr. Evans in a gala event. This communication center has been named to be one of the official press hubs and communication centers for the State of Israel’s hosting of the 5th World Holocaust Forum and the 75th Anniversary of the Liberation of German Nazi Concentration Camp Auschwitz.

In addition, FOZHC is building an educational center, a think tank, and an online institute. This think tank, in cooperation with other Christian think tanks from around the world, will in joint effort build a road map for decision-makers and enlighten the epicenters of politics, economy and the media for hundreds of millions. The online institute partnered with “Blackboard” – the world’s largest educational platform that is worth $2.3 billion – will prepare millions to fight antisemitism and inspire them to defend the Jewish people and the State of Israel.

Dr. Mike Evans is a No. 1 New York Times bestselling author with 100 published books. He is the founder of Friends of Zion Museum in Jerusalem, of which the late Shimon Peres, Israel’s ninth president, was chairman. He also serves as a founding member of the Trump Evangelical Faith Initiative and has 70 million global followers and supporters.