A Jewish Homeland -In Africa?

Can one possibly imagine the Jewish state existing anywhere else except in the Holy Land, the Land of Israel?  Well, indeed there was such a proposal put forth and seriously considered – though ultimately rejected – in the early 20th century.

The Uganda Plan was a proposal suggested by Britain in the early 1900s to give a portion of British East Africa to the Jewish people as a homeland. While the plan was unsuccessful, it was attractive to some early Zionists as a “doable” short-term solution to deal with the stateless, defenseless situation of the Jewish people. It drew support from no less than Theodor Herzl, founder of the modern Zionist movement, as a temporary refuge for European Jews facing antisemitism. 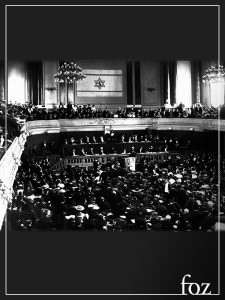 Then British Colonial Secretary Joseph Chamberlain, who raised the plan, noted that, “If Dr Herzl were at all inclined to transfer his efforts to East Africa, there would be no difficulty in finding land suitable for Jewish settlers.”

Chamberlain offered 13,000 square kilometers (5,000 sq. miles) at Uasin Gishu (also spelled “Gwas Ngishu”), an isolated area atop the Mau Escarpment. The land was thought suitable because of its temperate climate and its relative isolation, being surrounded by the Mau Forest. It was hoped the area could be a refuge from persecution for the Jewish people. The land was not in fact in Uganda but in the British controlled East Africa Protectorate (modern Kenya)

In 1903, Herzl met with Chamberlain and other high-ranking British officials who agreed in principle to Jewish settlement in East Africa. At the Sixth Zionist Congress at Basel on August 26, 1903, Herzl proposed the British Uganda Program as a temporary refuge for Jews in Russia in immediate danger. By a vote of 295-178 it was decided to send an expedition (“investigatory commission”) to examine the territory proposed.

While Herzl made it clear that this program would not affect the ultimate aim of Zionism — a Jewish entity in the Land of Israel — the proposal aroused a storm at the Zionist Congress and nearly led to a split in the Zionist movement. The Jewish Territorialist Organization was formed as a result of the unification of various groups who had supported Herzl’s Uganda proposals during the period 1903-1905.

The Uganda Program was finally rejected by the Zionist movement at the Seventh Zionist Congress in 1905. There were many – not only Jews, but also devout, Bible believing Christians — who could not tolerate the idea that a Jewish homeland could be considered anywhere else than in the land promised by God to Abraham and his descendants. Indeed, an early Christian Zionist, William Blackstone, sent Herzl his personal Bible, marked with all references to the Land of Israel, to remind him of the ideal of the Jews returning to their homeland. The reference to Blackstone and this incident of his Bible can be heard in the Friends of Zion Museum in Jerusalem galleries.

There were continued sporadic suggestions for other territories in the world to  be considered as suitable sites for a Jewish homeland, but ultimately all of these fell by the wayside after the issuance of the British Balfour Declaration of 1917, which pledged the support of the British government for the establishment of a Jewish homeland in Palestine.

Thus ended the rather brief and perhaps bizarre saga of a Jewish homeland being created in the heart of Africa.