General Marie Pierre Koenig was a French army officer and a politician. Koenig was born in a town called Caen in France. He served with distinction during WWI, and after the war, he continued his service in Morocco. At the time that WWII broke out Koenig was ranked as a Captain and was stationed in Norway to stop the German invasion. Unfortunately, that did not help, and Norway fell to the hands of the Germans. Koenig and a few of his men were able to escape the area and made it to London. 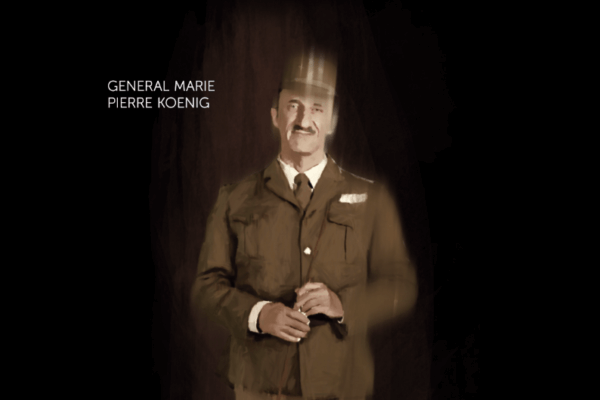 On June 18, 1940 Charles de Gaulle announced the establishment of the “Free French”, the government and military forces-in-exile that were to continue fighting the Germans outside of France’s borders. There weren’t many forces outside France that could join the “free France force”, but Koenig Joined De Gaulle. De Gaulle promoted him to rank of Colonel, and Koenig was named Chief of Staff in the first division.

Koenig served for a while in Syria and Lebanon and later he was promoted again to rank of General and took command of the First French Brigade in Egypt. Together with his unit of 3700 men, Koenig held ground against five Axis divisions for 16 days at the battle of “Bir Hakeim”, where they fought alongside the British and against the Germans and the Italians, until they were ordered to evacuate on June 11, 1942. In the dark of the night, the French and the allies slipped away, unbeknownst to the Germans. They had done the impossible.

After retreating, General Koenig watched as the ragged, unknown Allied survivors from the other end of the line staggered in to the French command center at Gasr-el-Abid. They dragged their wounded as best they could. Major Liebmann reported to a concerned General Koenig. Speaking in perfect French, he told General Koenig they were Jewish Palestinian soldiers. Of the 400 men who made up the battalion, over three hundred, 75%, had been killed or wounded.

The General observed their flag flying proudly. It was being taken down and folded by a very tired Jewish soldier. Koenig demanded to know why the Jewish Soldier was taking the flag down. Major Liebmann told the French General that British regulations did not let them fly their flag, the blue and white flag with the Star of David.

General Koenig ordered the soldier to stop folding up the flag and instead he ordered to place the flag on the front of his army vehicle, right next to and equal to the flag of France. Koenig saluted the flag, and ordered all of his officers to stand at attention and salute as well to the future flag of Israel. It was the first salute ever by a foreign officer. For that and for being a true friend, General Marie-Pierre Koenig is presented at the Friends of Zion Museum in Jerusalem.

After his time in Northern Africa, Koenig served as the Free French delegate to the allied headquarters under General Eisenhower. In 1944, he was given command of the Free French who participated in the invasion of Normandy. Later that year he was given command of the Free Forces of the interior (FFI) in order to unify various French resistance groups under De Gaulle’s control. The role of the FFI became decisive in the battle for Normandy and the landing in Provence of the US seventh army and French army B. on August 21, 1944. De Gaulle appointed Koenig military governor of Paris in order to restore law and order.

After the war, Koenig was commander of the French Army in the French occupation zone in Germany from 1945-1949. In 1949 he became Inspector General in North Africa and in 1950 he was appointed vice president of the Supreme War Council. In 1951, after his retirement, Koenig was elected as a representative to the French National Assembly and briefly served as Minister of Defense.

Marie-Pierre Koenig died on September 2, 1970. In 1984, he was posthumously declared Marshal of France. Throughout his career he was awarded a large number of military honors and decorations