With his black eyepatch and crooked smile, Moshe Dayan was undoubtedly one of the most widely recognized Israeli figures of the mid-20th century. He was a warrior, commander, politician and statesman, he was also the epitome of the brave, daring and new, during the formative years of the young State of Israel.

Moshe Dayan was born on May 20, 1915, the second child born in Degania Alef, the first kibbutz (collective community) in the emerging Jewish state. While he moved with his family in 1921, he grew up on Nahalal, a moshav (farming cooperative) in the country’s north. 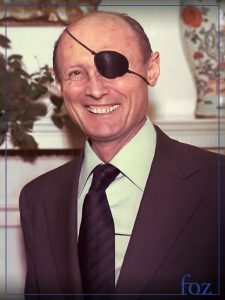 At a young age, Dayan joined the Haganah, an illegal Jewish defense force and was later arrested and imprisoned (1939–41) by the then ruling British authorities. After his release, he led Jewish forces against the Vichy French in Syria, where he lost his left eye in action, thereafter wearing the black patch that became his hallmark. One of Dayan’s military heroes was British Christian Zionist intelligence officer Orde Wingate, under whom he served in several Special Night Squad operations.

After his experiences with Wingate, Dayan rose rapidly through the ranks of the Haganah and — after the declaration of the State of Israel in 1948 — in the newly formed Israel Defense Forces.

As commander of the Jerusalem Front in the 1948 Arab–Israeli War and eventually Chief of Staff of the Israel Defense Forces (1953–58) during the 1956 Suez Crisis, as well as Defense Minister during the Six-Day War in 1967, Dayan became to the world a fighting symbol of the new State of Israel. He was also a controversial figure because of his independent approach to warfare and diplomacy, not always in accordance with his superiors. After the Yom Kippur War of 1973, Dayan was blamed as Minister of Defense for the lack of preparedness; he resigned after some time.

In 1977, following the election of Menachem Begin as Prime Minister, Dayan was expelled from the Labor Party because he joined Begin’s Likud-led government as foreign minister, playing an important part in negotiating the peace treaty between Egypt and Israel. Dayan resigned his post in October 1979 because of a disagreement with Begin over whether the Palestinian territories were an internal Israeli matter.

Moshe Dayan died on Oct. 16, 1981, at the age of 66 in Tel Aviv. He is remembered as a soldier and statesman who led Israel to dramatic victories over its Arab neighbors and became a symbol of security to his countrymen. Dayan’s name is perpetuated in the many streets and boulevards in Israeli cities that are named for him.