The name Abraham Lincoln is known to millions, not just in the United States, as one of America’s greatest presidents. He is famous for having maintained the American union and freed its black slaves. Less known is that he also championed the rights of Jewish Americans, even when it was difficult and unfashionable to do so.

Of President Lincoln’s actions to assist the Jewish people, his most notable and public manifestation was Lincoln’s cancellation of a general order by Union Army Gen. Ulysses S; Grant. On Dec. 17, 1862, Gen. Grant issued a decree which expelled all Jews from the areas under his control, which stretched from northern Mississippi to the southern tip of Illinois, and from the Mississippi to the Tennessee Rivers. A long-time anti-Semite, Grant had come to think of Jews as speculators and war profiteers. The fact that thousands of Jews were heroically serving in the Union Army at the time seemingly did nothing to change his anti-Jewish hatred. 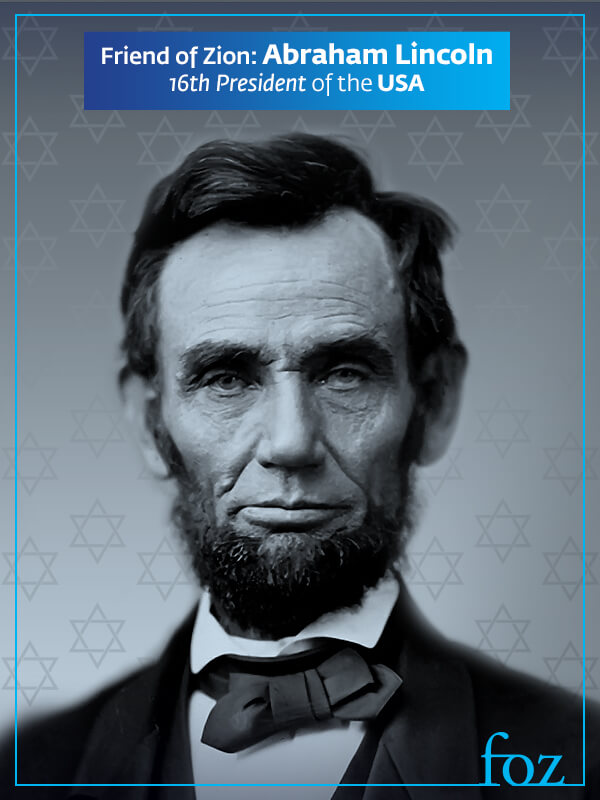 Upon learning of the order, Lincoln immediately took steps to cancel Grant’s order. On January 6, 1863, Grant’s headquarters was forced to send out several telegrams notifying those in the areas he controlled that the order expelling Jews was revoked. The day after the order was revoked, a delegation of Jewish leaders travelled to Washington D.C. to thank the President. Lincoln is quoted as having assured his Jewish visitors that he knew “of no distinction between Jews and Gentile” and stressed his revulsion at Gen. Grant’s orders and virulent anti-Semitism. There are many other earlier indications of these special feelings of Lincoln for the Jews.

Lincoln regularly quoted from the Bible in letters, speeches and ordinary conversation. But unlike many American Christians of his time, Lincoln did not focus primarily on the Christian parts of his Bible, and seemed remarkably comfortable with the Torah. Also, unlike many 19th Century American Christians, Lincoln had many Jewish friends, the first of which was Julius Hammerslough. Hammerslough was a young store owner in Springfield, Illinois. When Lincoln was elected to the Illinois State Legislature in 1834, he met Hammerslough, and at a time when Jews were viewed with suspicion, Lincoln treated Hammerslough as an equal. Once Lincoln became president, Hammerslough became a frequent guest at the White House.

Another of Lincoln’s closest friends was Abraham Jonas. Jonas was a merchant, lawyer and politician, who supported and encouraged Lincoln for most of his life. Jonas and Lincoln were both members of the Illinois State Legislature and were active in the anti-slavery Republican Party after its establishment in 1854. Jonas gained a reputation as one of the very first public figures to encourage Lincoln to run for president and was the only person Lincoln ever referred to as “one of my most valued friends”.

As the Civil War initiated, Lincoln recruited military and civilian leaders to help lead the fight. He openly appointed members of the Jewish people, never disparaging them for their religion, as many of his contemporaries constantly did. In addition to Jewish military officers, Lincoln also appointed about dozens of Jews to be quartermasters, overseeing housing, supplies, transportation and clothing for the troops. When Jews began lobbying Congress to allow Jewish chaplains in the army, Lincoln supported their cause, eventually seeing the passage of an 1862 law changing the requirements for becoming a military chaplain, and for the first time in history allowing non-Christians in the post. Lincoln approved the first Jewish military chaplain on Sept. 18, 1862, Rev. Jacob Frankel of Rodef Shalom congregation in Philadelphia.

On April 14, 1865, the Lincolns were watching a play in Washington D.C.’s Ford Theatre when Lincoln was gunned down by John Wilkes Booth, an enraged and unbalanced actor. Later, Mary Todd Lincoln, the president’s wife, said Abraham had just a few minutes earlier said that he hoped one day they could travel to visit the land of Israel together. Among the millions who mourned the 16th President, many Jewish congregations held special services and composed prayers for their beloved president. In Springfield, Illinois, where Lincoln was buried on May 4, 1865, his old friend Julius Hammerslough closed his store and displayed a portrait of Lincoln with a declaration that captured what so many felt: “Millions bless thy name.”

Today, in addition to monuments to Abraham Lincoln in the United States, a street in central Jerusalem is named for Abraham Lincoln, a fitting tribute to the Jewish people’s gratitude to a president who championed and defended America’s Jews.